Exploring Primorska – between the Gulf of Trieste and the Julian Alps

A visit to Primorska, the coastal wine region of Slovenia, can be combined seamlessly with a wine tour in neighbouring Istria in Croatia. Once you arrive across the border, you can pause for a cappuccino on the waterfront in Piran, spread out along a tiny tongue of land tipped with an ancient lighthouse and embracing a graceful bay.

After a brief incursion into Italy, skirting round Trieste, you reach the tiny Slovenian enclave of Goriska Brda (‘Gorizia’s hills’), whose vineyards nuzzle up against those of Italy’s Collio. You can look across into the Italian vineyards from the tower of Marjan Simcic’s winery. Typically for this small region, Simcic has vines on both sides of the border: of the estate’s 18 hectares of vineyards, six are in Italy, the rest in Slovenia.

Primorska’s perfect winegrowing climate – gusts of warm air from the Gulf of Trieste to the south and cool draughts from the Julian Alps to the north – gives concentrated, full-bodied wines capable of great ageing. As in Istria, whites predominate but up here Malvasia gives way to Rebula (Ribolla Gialla in Collio) and Sauvignonasse (aka Tocai Friuliano). Simcic’s superb Rebulas – some of them are offered by the glass at one of Britain’s top restaurants, the Fat Duck in Bray – range from a fine single varietal wine through the more complex Teodor Belo blend combined with Pinot Grigio and Sauvignonasse, to their award-winning Leonardo, a deep golden passito aged 30 months in oak barrels that won a gold medal (again) in Decanter magazine’s 2010 World Wine Awards. Another lovely wine, elegant and balanced, is their Sauvignon Blanc, whose ‘pronounced aromas of apple compote and passion fruit’ convinced the jury that a second gold medal was in order. And not content with their success with white varieties, Simcic’s elegant Pinot Noir 2007 has just been named Best Old World red by the same magazine. 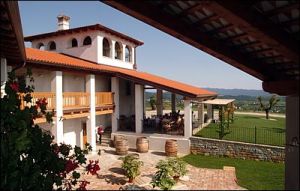 Belica (pronounced Belitsa) in the hilltop village of Medana just above Simcic, is a haven of peace and warmth built in typically Slovenian style – whitewashed with slender white columns, balustrades and red tile roofs – and the lodgings here make a good billet for Primorska explorations. It’s owned and run by the indefatigable Zlatko and Mary Mavric, who somehow find time along with their duties as attentive hosts to make their own wine, press their own olive oil, cook up home-made jams and preserves, cure some superbly fragrant prsut and salami, and distil an impressive range of clear fruit brandies. The brandies come in a flavour for every occasion (or as they would have it, for every ailment) including one flavoured with lovage which – assures Zlatko – is guaranteed to revive flagging libido.

Close by in Plesivo is Kabaj Morel, a sunny, sunflower-yellow domacija (literally ‘homestead’) where expatriate Frenchman Jean-Michel Morel and his Slovenian wife Katja run a lively wine bar and restaurant (plus six simple, stylish rooms). Jean-Michel is a fan of clay amphorae for his stunning Malvasia/Rebula/Sauvignonasse combination (Gary Rhodes has selected some for his restaurant empire), and he also makes a balanced Merlot-rich Bordeaux blend. Both are perfect partners for Katja’s updated, upmarket take on traditional Brda dishes – gnocchi with prsut and fennel sauce, home-made sausages with white polenta.

A visit to Primorska would be incomplete without a look at what the Lavrencic brothers are doing at Sutor, co-owned by Primoz Lavrencic, who combines winemaking with teaching at the nearby university, and his brother Mitja, the postmaster. Their first vintage was in 1991 but the vineyards were acquired in the 1930s by the Lavrencic great-grandparents. They own prime sites in this southern end of the Vipava valley, a region basking in subalpine sunshine and ventilated by the Burja, a violent northeast wind that rattles down the valley scattering any rooftop tiles not weighted down with heavy stones and shutting down the motorways. 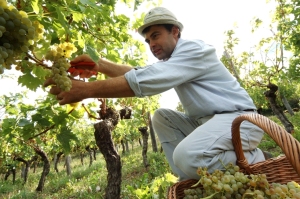 Of Sutor’s 7.5 hectares, 70% is planted with white varieties (Chardonnay, Malvasia, Rebula, Sauvignon Blanc and Welschriesling) and the rest red (Merlot, Pinot Noir and Refosco) – “everyone talks about red wine, but they drink white,” observes Primoz. This may be true, but plenty of people are also talking about Sutor whites. His distinctive Chardonnay combines elegance and power with a discreet hint of oak, and the Burja blend (named after the infamous wind whose effects are graphically depicted in the bent-over-double trees shown on the label) of Rebula, Malvasia and Welschriesling has bright fruit, a smokey whiff and good acidity. Before your leave this spectacularly beautiful valley, with its hills and distant mountains, ruined castles, Gothic churches and picturesque villages, be sure to taste Lavrencic’s newest baby – a cherry red, smooth and scented Pinot Noir. It’s a wine to talk about, and drink, and treasure.

Everything seemed yellow on our first wine tour in Collio in north-east Italy, right on the Slovenian border. The sun shone brightly, some of the wines were curiously yellow and the Vespa parked outside our delightful agritourismo in the vineyards was bright yellow too! Unfortunately we were not on a leisurely trip, so we zipped around with four wheels rather than two in order to see as much as we could in a short three days.

Collio, part of Friuli-Venezia-Giulia, is well-known to the inner circle of Italian fine wine fans as the source of the country’s very finest white wines. We were lucky that just before our planned visit we were invited to a launch of a new book on Collio’s wine and food by Carla Capalbo, an American living in Italy. This travel guide with a focus on wine and food provided incredible in-depth information, clearly presented and I would highly recommend buying a copy if you plan a visit there. Wine Travel Guides will add guides to this area soon and I’m very much hoping that Carla will be our specialist contributor.

The local Consorzio, who both govern production and promote the wines of Collio, want to encourage wine tourists and supported publication of Carla’s book whilst leaving her a free hand to write as she wanted. Providing a range of Vespas for tourists to rent is also the Consorzio’s initiative, along with plenty of leaflets and maps available in the growing number of excellent agritourismo accommodation, restaurants and, of course, winery tasting rooms that are dotted along the wine route. Incidentally part of the wine route also doubles as the cherry route – something that back in May we enjoyed at each breakfast!

The heart of Collio, around the town of Cormons, is less than a couple of hours east of Venice and we soon discovered it is in deep countryside with the Julian Alps often in view. The views from the wine producers we visited were of rolling hills with forests high up and vineyards with little villages below. For those not used to being in border country, it might seem strange to find that not only do many wine producers in this Italian land speak to each other in Slovenian (or a local Friulian dialect), but when they show you the view, they carefully indicate: “that village is in Slovenia, the few houses next to it are in Italy, the next village is Slovenia …” and so on. Collio is named Brda in Slovenian.

Vineyards in Zegla in the heart of Collio

The predominantly white wines are generally dry and full-flavoured from a range of grape varieties. Pinot Bianco, Pinot Grigio and Friulano (formerly named Tocai Friulano) are the best known, though there is good Chardonnay and classy Sauvignon Blanc too, along with a handful of curiosities, most notably Ribolla Gialla, which made in the traditional way with a long maceration on the skins (most unusual for whites) is positively yellow and delicious. Most producers also make a blend which is simply designated as Collio DOC and is often the top of their range. It’s a good thing these white wines are full-flavoured because the hearty local food might, on first taste, call out for red; but persevere and you’ll find the full-bodied whites match really well. My enduring memory of tasting with the wine producers is being served fabulous dried hams (notably from the famous producer Lorenzo d’Osvaldo) and salamis, plus cheeses with great bread and olive oil.

There are few towns of any great size in Collio, the most important being Gorizia (which also has a Slovenian sector called Nova Goricia). We enjoyed exploring the smaller town of Cormons, especially sitting down on a balmy evening outside in the main square for a couple of glasses of wine and a plate of food at the friendly Enoteca di Cormons. We were also told about a joyous wine and food street festival in Cormons that we missed by a day – Fieste da Viarte, which is held on a Sunday at the end of May. 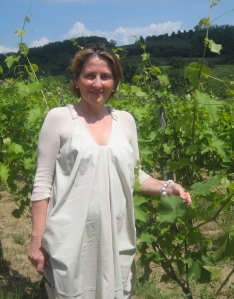 Patrizia Felluga in her vineyard

Back on the food trail, we had a lovely casual lunch at Luka, a trattoria in the important wine village of San Floriano del Collio. Owned by Patrizia Felluga of the famous Felluga wine dynasty, Patrizia also owns her own winery Zuani, producing just two excellent Collio DOC blends, and is the president of the Consorzio. Together with our friendly agritourismo hosts, wine producers Savina and Renato Keber, we also had a fabulous evening out at La Subida, one of the most important restaurants in the region.

La Subida is more than just a restaurant, as they also offer accommodation, have an equestrian centre and an informal trattoria down the road. Eating a meal at the beautiful La Subida restaurant is a real event, in a relaxed environment, with excellent local food and a huge wine list: if you have the budget to splash out, you should definitely seek advice on the wines to choose from the sommelier. The quality of La Subida, of the local white wines and the warm Slovenian-style welcome combine to show that Collio is a real heartland of gastronomy, something that until recently has been perhaps restricted to those ‘in the know’.

Comments Off on Visiting vineyards by Vespa and speaking Slovenian |